The Rolling Stones in the Sixties –A People’s History


this book charts their career from early pub and club gigs through to Stonesmania on the back of the worldwide hit ‘(I Can’t Get No) Satisfaction’ and onto 1969’s era-defining free concert in London’s Hyde Park.

First hand fan accounts plot the Stones’ journey to fame via UK and US hit singles including ‘It’s All Over Now’, ‘Little Red Rooster’ and ‘The Last Time’ and headline-making outrage in the British Establishment because the Stones grew their hair long, refused to wear a collar and tie and wouldn’t smile on cue for the press. Britain in the post war 1960s was a different place; a black and white world with one TV channel and where teenagers were expected to respect their elders and know their place. The Rolling Stones epitomised teenage rebellion. Teenagers saw the Rolling Stones as the antidote to the saccharine and clean-cut Beatles. The Stones broke the rules on fashion, morality and dress code. They had sex outside marriage, got busted by the cops for drug misuse and somehow kept making hit records. This collection of over 600 fan memories of the classic line up of Mick, Keith, Brian, Charlie Watts and Bill Wyman tells the Stones story afresh in the words of their audience. Without the Rolling Stones, the Swinging Sixties would not have swung. Blues legends Muddy Waters, Howlin’ Wolf and Jimmy Reed would remain unheralded. There would still be sex, drugs and rock ‘n’ roll. But the world would look a whole lot different. 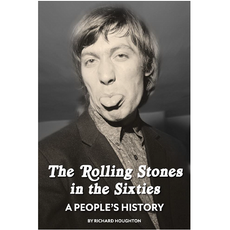