world peace is none of your business


toning down the powerful, rock-oriented approach of 2009's 'years of refusal', mozza's 10th album is a relatively subtle (although not lyrically) affair, but one that still stomps, kicks & screams.

a fascinating, dark & dense record that draws you in for repeated listens & gets stronger each time. "the old devil can still spring a surprise...Gusts of electronic noise blow through the songs, a didgeridoo groans mournfully, the drumming is sometimes coated with a layer of fuzz and often collapses into lugubrious stamping...it feels more spectacular & colourful than its oppressively grey predecessor" 4/5 - guardian. "This most British of pop bards is renegotiating his own boundaries" 5/5 independent, "Morrissey has returned to remind us it's still possible to write pop songs of wit and character" 5/5 - Times. 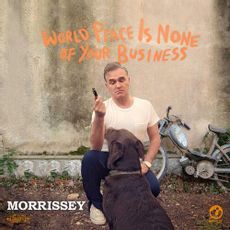