Hailing from Mexico City, their third album continues their exploration into the psychedelic richness and rhythmic pulse of Amazonian cumbia while at the same reaching for new sounds and textures.

it makes for a thrilling modern reimagining of the sounds of mambo, cha cha, porro and danzon. weird, fun, and brilliant, this is music to make a bunch of record store nerds dance – use responsibly. “… elegant arrangements and superb musicianship ...” - Morning Star “...a medley of sounds aptly billed as the ‘soundtrack to a psychedelic spaghetti western starring the Grim Reaper, Mexican-style’...the music is captivating, and irresistibly danceable.” - NPR Music 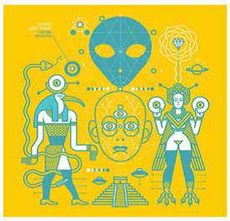