incredible (wrongtom rx) / as you see it (mr benn rx)


nice up! return with another 2 classic cuts from the fashion records vaults, remixed & refashioned for 2013 by wrongtom & mr benn.

universally loved, general levy's 'incredible' was originally recorded as a dancehall number, then later remixed in a jungle style by m-beat for chart success around the globe. wrongtom takes it back to the source with a fresh bumping reggae riddim featuring live instrumentation & his trademark dub fx. over on the flip, rising star of the reggae world mr benn gives his spin on the modern dancehall sound with a dancefloor pleasing remix of cutty ranks ‘as you see it’. probably one of cutty's lesser known tracks, this also found its home in the jungle raves of the mid ‘90s when sampled extensively by the producers of the day. 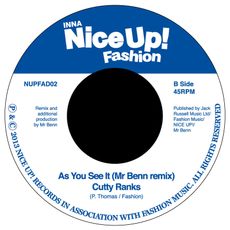