whose shared memories provide the inspiration for their alt-pop imaginings. Both buoyant and lush, the London based band combine layered androgynous vocals with muscular drums, astral synths and shimmering guitars in a celebration of the breathless sensations of youth and coming of age. Friends since the age of 11 and playing in bands together since their teens, the two reignited their musical bond again in early 2011. Initially exchanging ideas over long distance correspondence, they used breaks from travel and other projects for intensive, marathon recording sessions. Retreating to the familiar surroundings of their hometown, they worked intuitively and resourcefully in utilizing every means at their disposal (with siblings occasionally joining in on the recording process) with the sole objective of producing great recordings touched by a transcendental jubilance and vague air of the otherworldly. Live they are augmented by an interchanging cast of friends and musicians in faithfully bringing their immersive dynamics and grand scale sonic vision to the stage. ‘Dancing’s Done’, their debut single, is a celebration of the spirit of camaraderie and an innate musical kinship, it is a perfect introduction to THUMPERS’ world of colorfully imaginative, exuberantly infectious pop. 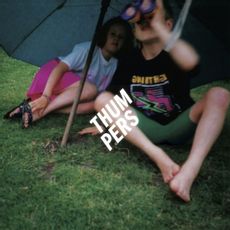