under the mistletoe / merry little christmas


The Silhouettes's“Under The Mistletoe / Merry Little Christmas” is one of 4 7"s released as part of the 2013 (& first) edition of the Snowflakes Christmas Singles Club.

Each single, limited to 500 copies & pressed on snow white vinyl, features an original & an interpretation of an a classic or obscure Christmas song. The 4th single in the series has surf pop band The Silhouettes from Amsterdam with a Ben Rider-penned original 'Under The Mistletoe'. The song was recorded in the Cinetol Studio & Jacco Gardner's studios, injecting the surf sound of the band with some psychedelica. The angelic voice of Mira Bell makes you melt like a snowman on a sunny day, while she sings of longing to sit under the mistletoe with her loved one on Christmas day. The Silhouettes back it with a surf version of the Christmas standard 'Have Yourself A Merry Little Christmas', written by Hugh Martin & Ralph Blane, first sung by the legendary Judy Garland in the classic 1944 musical 'Meet Me In St. Louis' & made legendary by Frank Sinatra. 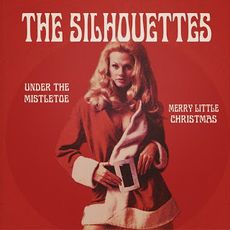