Brown enjoyed a certain amount of success after moving to Chicago in the 40s. He started by sitting in with artists such as Muddy Waters, but soon formed his own band. In 1955, he had a record issued on the local Parrot label. Later in the decade, he recorded for Bandera, with little commercial success. He gave up attempting to make a living from music until the 70s, when he made a comeback, taking advantage of the renewed interest in the blues. This reissue of his 1958 waxing shows the man at his infectious best. 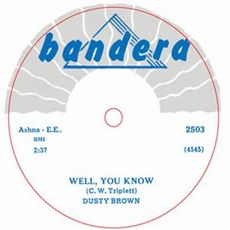