Martin Savage & the Jiggerz are a supergroup international power trio! We have the French‐Japanese rhythm section from King Salami & the Cumberland Three, Eric Baconstrip (The Ulcers, Parkinsons, Paul Collins Beat, The Nips) & Kamikaze U.

T., who also played in the Chinese Lungs together, teaming up with their old pal, Sweden’s garage‐punk legend, Martin Savage (The Blacks, the Locomotions, Tokyo Knives, and a dozen more…). With the Jiggerz’ second single, shortly released after their first 7” “Time To Get Out” on Folc Records, they give you two 1970’s punk rock hits, simple, fast & straight to the point, the way it should be. Both songs “Between The Lines” and “Shooting For Stars” are fast, loud and out‐of‐control wild 77 punkrock‐songs to go wild to with killer guitars, absolutely mental drums and snotty, cool vocals! Martin Savage & The Jiggerz are pure dynamite! 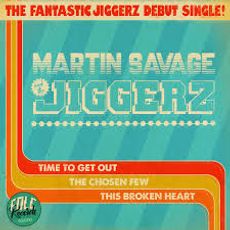