COS might not be the first genre defying progressive music group you’ve heard who share both wordless onomatopoeic vocals and a snappy three letter title (complete with philosophical leanings and alchemic penchants) but on listening to this first ever custom Cos compendium you might have just discovered a new favourite.

 Perhaps it’s no coincidence that COS share close spiritual, stylistic or social connections to the aforementioned bands, as one of the few longwithstanding single-syllable ensembles to remain utterly idiosyncratic and incomparable within their hyper-focussed and impenetrable creative bubble. But as a 1970s group that effortlessly mix head-nod prog, synthdriven jazz, cinematic sound-designs, dislocated disco, Arkestral operatics and high-brow conceptual anti-pop grooves, it’s easier to remember the name COS than thumb the vast amount of genre-dividers in your local record shop which COS could occupy. With the crème de la crème of Belgian jazz / prog / psych / funk within their ranks, their combined idea-to-ability ratio litters the Cos-ography with concepts that aficionados, future fans, collaborators and critics still haven’t began to unravel.  With their earliest roots in the compact jazz group Brussels Art Quintet the group spent their sapling years creating art-school prog under the name Classroom. This flourishing collective, cultivated by multiinstrumentalist mainstay Daniel Schell, would soon shed its leaves, dropping band-members and typographically reducing its moniker to simply COS (a multi-purpose, globally recognised word, with links to Alchemy and philosophy, with a hard phonetic delivery to suit the groups heavier rhythmic approach). In its new skin COS also shed all forms of orthodox language to find its true exclusive voice. Fronted, in the conventional sense, by the daughter of author and part-time jazz player Jean De Trazegnies, the band’s wordless singer changed her name to Pascale SON, to accentuate the French word for ‘sound’, drawing comparisons with sound poets like Polish jazz legend Urszula Dudziak or Hungarian Katalin Ladik but retaining the crystalline femininity (and funk) of Flora Purim, while effectively sharing an imaginary lyric book of non-words with Damo Suzuki, Magma or a future Liz Fraser.  The selection of tracks on ‘COSMIX’ intends to serve as a varied cross section of favourite pieces by the group which tick all the stylistic and conceptual boxes found in Finders Keepers Records’ previous discography, not to mention various family tree inosculations along the way.  Compiled with the full cooperation of the original COS architect Daneil Schell. 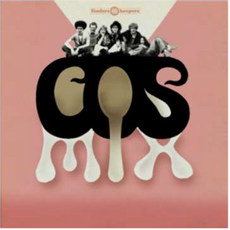