A meeting of minds and cultures well-suited to the Alasdair Roberts’ syncretic fervor: responding to the invitation of Norwegian fiddler Hans Kjorstad, he found a group of musicians well-versed in folk, jazz and free-playing.

Their diverse musics deeply inform this collection of Roberts’ originals and Scottish and Norwegian traditional song. In January 2019, at the invitation of fiddler Hans Kjorstad, Alasdair Roberts travelled from his home in Glasgow, Scotland to Oslo, Norway, where the two men convened with five additional Scandinavian musicians at Riksscenen, Oslo’s centre for Norwegian traditional arts and music. Thus newly-formed, the group worked on arrangements of songs — self-written and traditional — from Alasdair’s back catalogue, in preparation for performances at Riksscenen as well as at ALICE in Copenhagen, Denmark and the bucolic western Danish island of Fanø. The group was named Völvur (The Seeresses), a reference to the ancient Icelandic apocalyptic text Völuspa (The Prophecy of the Seeress). In January 2020, Völvur visited England and Scotland, to perform with Alasdair Roberts at Cecil Sharp House, London and at Platform, Glasgow, the latter as part of Celtic Connections festival. The group had new material — freshly written songs by Alasdair and several traditional Norwegian songs sung by Marthe Lea — and over a couple days at Sam and Rachel’s Studio, Hackney, laid down the music which now flows forth as The Old Fabled River. The musicians who make up Völvur — Marthe Lea, saxophone, clarinet and voice, Fredrik Rasten, guitars and voice, Andreas Hoem Røysum, clarinet, Egil Kalman, bass and electronics, Jan Martin Gismervik, drums, percussion and the aforementioned initiator of the project, Hans Kjorstad on fiddle — are a busy and artistically inquisitive group, involved in a diverse range of projects with a wide variety of musical interests, from folk and jazz to free music, modular synthesis, microtonality and beyond. They make an ideal pairing for such voyages in the alchemical world as Alasdair pursues in his own music. On The Old Fabled River, Alasdair Roberts og Völvur meld their worlds: fiddle and vocal styles formed in the Norwegian valleys blending now with exploratory clarinet, saxophone and metallic bowed guitar drones, now fashioned into baroque folk arrangements. In one case, instrumental accompaniment is laid aside, as three voices locate a questing fullness harmonizing together. A word about the four “traditional” tracks on this collection. “Song Composed in August,” sung unaccompanied, was written by the well-known Scottish poet Robert Burns; it has been described by the great Scottish singer Dick Gaughan as a song “about everything.” Fredrik Rasten suggested they record it; the arrangement is heavily indebted to that by the group The Voice Squad. “Sweet William’s Ghost” is a traditional night visiting song, or revenant ballad. Alasdair recorded it once before, over a decade and a half ago, in a solo arrangement; but sometimes the ghosts don’t leave, and so there arose a feeling to resummon the song. The two Norwegian songs, sung by Marthe Lea, are spiritual pieces respectively about the sun coming up and the sun going down. They put traditional Norwegian melodies to sets of lyrics from two 17th-century Scandinavian hymnists, Thomas Kingo (of Denmark) and Samuel Olsen Bruun (of Norway). A word about Alasdair’s four self-written songs on this collection. All are love songs of sorts, as most directly exemplified by “Orison of Union” and “The Tender Hour.” “Hymn of Welcome” is a song imagining the passing on of a candle-flame; one at life’s end offering a benediction to one at its beginning. “The Green Chapel” touches upon the ancient notion in Celtic culture of “the three noble strains” of music: geantraí, goltraí and suantraí (the strains of joy, lamentation and sleep). These are the three intertwining threads from which the fabric of a music is woven. In “The Green Chapel” the three knot together, like wind, wave and wood, to form a syncretically co-existing wholeness — a fulfilling distillation of the deep nature of collaboration among Alasdair Roberts og Völvur. 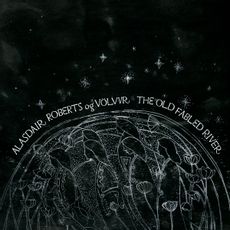