Welcome To The Other Side

JEAN-MICHEL JARRE’S GROUNDBREAKING NEW YEAR’S EVE LIVE PERFORMANCE ‘WELCOME TO THE OTHER SIDE’. Jean-Michel Jarre rang in 2021 with a groundbreaking live performance from a virtual reality Notre-Dame cathedral. The show, which combined life-like concert visuals in VR with a real live studio performance, introduced a mixed-media approach which was the first of its kind. this NYE live performance includes tracks from his recent Grammy-nominated opus Electronica, as well as new reworked versions of his classics, Oxygène and Equinoxe. The CD/BLU-RAY package includes the full concert, along with a MasterClass with Jarre, where he reveals the secrets behind putting on such an ambitious spectacle. Viewers will also have access to a behind-the-scenes video, capturing the final hours leading up to the performance, and its production. Additionally, both formats include a code to download a newly produced Binaural version of the performance which will also be made available via DSPs. The 3D ‘spatial’ audio mix brings a new dimension of sound to listeners on headphones and really has to be heard to be believed. 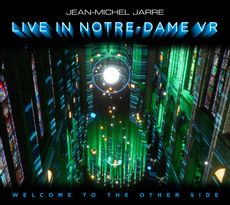