Pere Ubu's darkest and most dramatic statement, ‘St Arkansas’ remains a work of offhand brilliance by a band who often seem capable of miracles.

This edition is newly remixed by David Thomas in 2021 and reissued on Fire Records. Following ‘Pennsylvania’, ‘St Arkansas’ (2002) was Pere Ubu’s next studio album featuring a travelogue of characters encountered on the Mighty Road from Conway Arkansas to Tupelo Mississippi, I-40 to US 49 to State 6. “I drove the route and wrote down what the Road was telling me.” David Thomas. Pere Ubu are the mainstream. “Immediate, energised and claustrophobic.. It's difficult to think of a more important band.” Mojo // “Straddling the extremes of pure, uncompromising modern art and pure, uncompromising loud rock.” The Sunday Times. 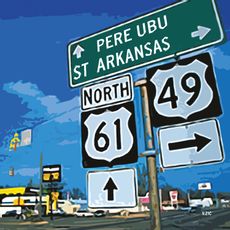