Just reading the artist and the title of this work would be more than enough to present this release: the most renowned Italian musician, composer and conductor, followed by one of the most famous Italian films ever: that's just what they are, after all, Ennio Morricone and "Cinema Paradiso", a film that in 1990 earned director Giuseppe Tornatore an Oscar for Best Foreign Film.

Love, nostalgia, melancholy, these are the three main ingredients of "Cinema Paradiso", the same that characterize Morricone's soundtrack. A work of pure classical music: orchestral, symphonic, compelling and moving, it's the perfect comment to the scenes expertly directed by Tornatore. Another cult release exclusively reissued by AMS Records, as usual on colored vinyl (solid purple & clear transparent mixed) in a gatefold cover with new artwork, also incuding a 30x30cm poster with flyers and promotional lobby cards. A must for any self-respecting movie maniac, presented in a LP format after more than 15 years! 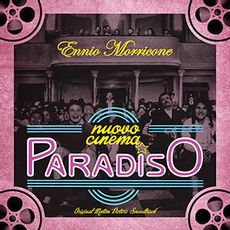