another killer score to a gorehound classic, in this case Fabio Frizzi's musical masterpiece 'THE BEYOND'.

The second in director Lucio Fulci's “Gates of Hell” trilogy after 'CITY OF THE LIVING DEAd', 'THE BEYOND' is an exercise in bone-chilling terror, atmospheric horror, and eyes being driven through by eight-inch nails. Chuck in an evil book, murderous spiders, and the zombie equivalent of Pippi Longstocking and you have a film consistently referred to as a masterwork of the splatter genre. However, 'THE BEYOND' goes a bit deeper than your average bloody feast in illustrating a ghostly mystery of blind girls, warlocks, and Joe the plumber. All of this is masterfully orchestrated by Frizzi's music, with two standout pieces that every fan of this picture should recognise. The first is an eerie piano motif that echoes throughout the score, while the second is the opposite, a fierce and madcap vocal piece that acts as the main title. Couple these with some great funk beats and some classic N'awlins blues, and you have an album that'll knock you on your ass so hard you'll end up in that creepy painting for forever and BEYOND. 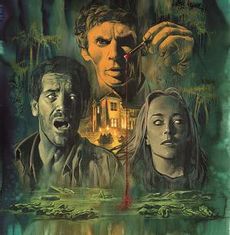