Music features heavily in ‘The Eddy’, with several original songs in each episode. All songs have been specially written by the hugely acclaimed musicians GLEN BALLARD, who also serves as an executive producer for ‘The Eddy’ and RANDY KERBER, and they will be performed by The Eddy Cast Band which includes drummer Lada Obradovic, bass player Damien Nueva Cortes, sax player Jowee Omicil, Ludovic Louis on trumpet, Randy Kerber on piano and singer Joanna Kulig who also stars in the show. The album will also include covers by sensational musicians ST. VINCENT and JORJA SMITH. The songs include ‘Kiss Me in the Morning’ performed by Jorja Smith, is the lead single released on April 30, International Jazz Day and ‘The Eddy’, performed by St. Vincent. There are 20 all original contemporary jazz songs on this breathtaking album. The first 16 songs are live recordings taken from the eight episodes of the series. In the encore portion there are four studio recordings featuring vocals from Jorja Smith, St. Vincent and Julia Harriman 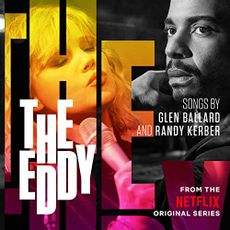