The Pyramids had built their reputation as Prince Buster's backing band during the Jamaican star's visits to the Uk but it was with the phenomenal success of their barely disguised alias' "Skinhead Moonstomp" that the group went down in legend.

Where a single venture is, an album must follow. Simaryp was well aware of what their skinhead fans wanted -- more of the same & the band served it up with relish. A dozen brace-snapping, big boot-stomping, sing-&-shout-along songs, with the occasional nod back to the rocksteady era to allow the boys a time out to chat up the birds, all played with aplomb & nicely balanced between stompers & slower numbers, 'Skinhead Moonstomp' was the ultimate party album. 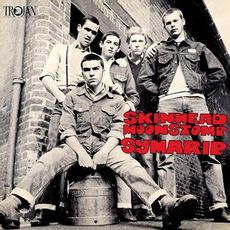