After forming the ‘Top Deck’ sound system with his brother, Ivan, Phillip ‘Justin’ Yap launched his label of the same name, in 1962 & Over the next few years, up until his departure for the US in 1966, the young producer’s run of hits continued, due in no small part to his employment of the exceptional talents of Jamaica’s number one band, the Skatalites.

The very best of the group’s recordings, along with the remainder of Yap’s instrumental output throughout the Ska era is collected on this 40 track 2CD set. Alongside the hits are numerous lesser-known gems & alternate cuts featuring the very best of Jamaica’s Jazz-trained musicians, so illustrating why Top Deck is today widely associated with the very best in original Ska sounds. 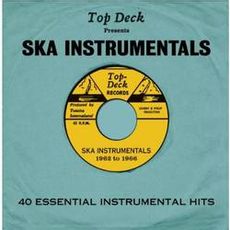