Feel So Fine: The Birth of Jamaican Ska


The 28 tracks which comprise 'Feel So Fine' are key recordings in the development of reggae’s precursor, ska.

Throughout the ’50s and into the ’60s, the most popular style at Jamaican sound systems was the hard-hitting New Orleans ‘shuffle blues’ sound, and the holy grail for the big operators were the obscurities that could serve as ‘exclusives’ for their sets, obtained from trusted importers or from forays to the US mainland. By the close of the ’50s this practice was threatened by significant developments, most notably the demise of this style of R&B as American music evolved into what would ultimately become soul. Sound system operators started taking the only possible route to ensure the continued popularity of their sets: become record producers and start creating their own ‘exclusives’. So it was that men such as Arthur ‘Duke’ Reid and Clement Seymour ‘Coxson’ Dodd began producing local talent, utilising Jamaica’s first commercial studios. Initially, there was little to distinguish these early home-grown recordings from New Orleans R&B records, but by the dawn of the ’60s, Jamaican ‘shuffle blues’ or ‘boogie’ had developed its own unique sound. Debate still rages as to the first locally-produced recording clearly distinguishable in style from its American forerunner, but the Coxson Dodd-produced ‘Easy Snapping’ is the most likely candidate. Other significant works from this period include the first commercially available disc to feature a rasta drumming ensemble, namely ‘Oh Carolina’. As Jamaica’s burgeoning recording industry developed, a select number of local performers acquired star status, and other entrepreneurs including Simeon ‘Little Wonder’ Smith, Leslie Kong and Chris Blackwell swelled the ranks of aspiring record label owners. Soon, Jamaican music had a clear identity of its own and by 1964, ska (or, if you happened to live in Britain, ‘blue beat’) had become an international sensation. Yet within a year or so of its heyday, ska had been succeeded by rock steady, which late in ’68, gave way to reggae, the style with which Jamaican music is still most commonly associated. A lot has changed since those pioneering days. The music contained on Feel So Fine provided a major part of the solid foundation upon which the island’s recording industry has since prospered and developed. Although now over half a century old, this music continues to provide immense pleasure to thousands the world over. And few can deny that the 28 classics on Feel So Fine are undoubtedly great. 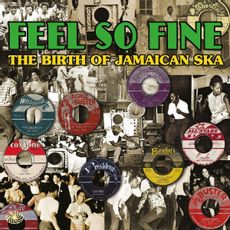