his best-known works as both as a solo artist & lead singer of the Paragons feature on this fantastic compilation of tracks from the legendary reggae singer & songwriter from Kingston, Jamaica.

After making his recording debut as a solo artist in 1963, John Holt led The Paragons into becoming one of Jamaica’s leading vocal groups with hits included ‘Only A Smile’, ‘On The Beach’ and the original version of ‘The Tide Is High’, an international Number One hit for Blondie in 1980. After The Paragons disbanded Holt promptly became one of reggae’s most popular solo acts, enjoying a hugely successful period that saw the release of his 1975 UK Number 6 hit, ‘Help Me Make It Through The Night’ and the extremely popular ‘Volts Of Holts’ series of albums. 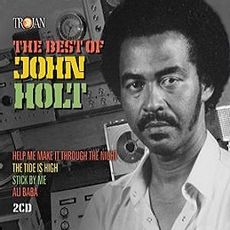