The Best of Judge Dread


collects 40 of his biggest & best hits from the artist best-known for his risqué approach to the world of reggae.

Former bouncer professional wrestler, Alex Hughes became an unlikely hit-maker for Trojan Records in the early 70s, when he adopted the moniker of Judge Dread. Between 1972 and 1978 his singles breached the UK top 50 on no less than 10 occasions, making him one of the most successful reggae acts of all time 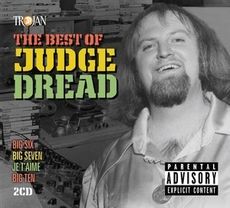