This release is the first-ever reissue of these sought-after LPs, and contains all the original songs in a lush cd package with 3 extra bonus tracks, photos, and sleeve notes by Diggory Kenrick.

Bunny Lee as producer, Prince Jammy as engineer, The Aggrovators making the tracks, the Holy Trinity of Jamaican Music. possibly no musical partnership was as prolific as the collaboration between Bunny ‘Striker’ Lee and Prince Jammy at King Tubby’s Studio between 1976 and 1982. In 1977 and 1982 respectively, ‘Conflict Dub’ and ‘Dubbing In The Front Yard’ were released in London as white labels in extremely limited quantities. The two LPs found the triumvirate of Lee, Jammy and The Aggrovators in perfect form with driving instrumentals, flashes of vocal beauty and mixes that ripped apart and rebuilt traditional notions of sonic structure. 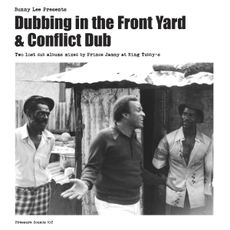