Visions of Us On The Land


the warmth that emanates from the final installment of the seattle native's cosmic trilogy provides an intoxicating aural high - the perfect meeting point between neil young, nick drake & randy newman.

Jurado’s new opus extends the hot streak ignited by 2012’s 'Maraqopa' & was followed by 2014's 'Brothers & Sisters of the Eternal Son' (one of the year's best records) - the autumnal orange glow to the spring green & summer yellow that preceded it. cut again with label mate & super producer Richard Swift, this lightly psychedelic, gloriously orchestrated record is a genius piece of work that will delight fans of matthew e.white, fleet foxes or father john misty. "Swift & Jurado didn’t throw everything against the wall in hopes that something oddly beautiful would emerge. They arranged it in such a way that odd beauty is communicated" - Pitchfork.

derry recommends: "Honestly didn’t think he’d ever top the astonishing ‘Brothers And Sisters Of The Eternal Son’ but this manages it with ease" 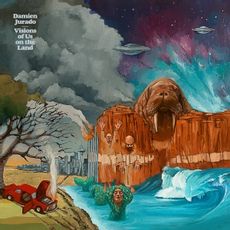