'skeleton tree' is a much more abstract, cerebral experience than anything else in his incomparable catalogue but as with all his work, it seeps into your veins & surges through your whole body.

Sonically, Nick and his band of not-so-merry-men draw heavily on Nick and Warren’s soundtrack work – the punishing open landscapes, the cold, hard stories that they score - there’s a constant sense of foreboding here (as there often is in these films) but this is conveyed with a surprising lightness of touch. The instrumentation is weighty in its presence but never overwrought or imposing. There’s a haunting space between words and notes throughout the album (vividly mirrored by the accompanying film, ‘One More Time With Feeling’, which explores the emptiness of grief). The career-defining ‘Jesus Alone’ and arresting ‘Magneto’ are the most salient examples of this – disquietingly bleak in their content and astonishingly arranged to augment these harrowing tales.

The album sees Nick deliver one of the best vocal performances of his considerable career – the rough broken hues of Johnny Cash or Leonard Cohen come to mind on ‘Girl In Amber’ and the aching desperation of ‘I Need You’ utilises his quivering, strained vocal to astonishing effect. The hypnotic incantations of ‘Rings of Saturn’ and ‘Anthrocene’, almost recital in their delivery, sound detached and icy, distant and terrifying. There is an air of defeat and resignation in ‘Distant Sky’ but the clarity of Else Torp’s operatic vocal offers a glimmer of hope….although we’re swiftly brought back to sobriety with the funereal closer, ‘Skeleton Tree’.

“With my voice, I am calling you”…..and we have followed. We remain your humble disciples Nick.

Derry:
“If anyone still had any doubt about Nick Cave’s place alongside the all time greats - Dylan, Waits, Cohen - this should convince anybody with open ears. No artist still working is making music of this quality, emotion and depth”

Kurtis:
“Far too dense to be summed up in one concise sentence. It’s simply blown everything else out of the water this year”.

James:
“For someone who has made a career singing about death and destruction, it’s only here that he’s turned storybook horror into something so devastatingly human and real.”

Ian:
“I’d like to give a shout out to Warren Ellis! Initially it was his subtle sonic loops and textures that kept drawing me back in.” 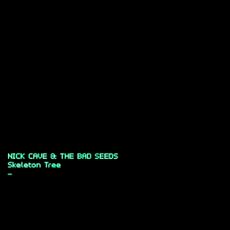