This is the sound of musicians revelling wildly in the gutter, churning out dirges of misanthropic vitality.  The rep list for these players is long, but a list of projects they have been involved with includes Part Chimp, Mugstar, Bonnacons of Doom, Dead Neanderthals, Dethscalator (not made-up), ligature, Gin Palace, and Earth. The LP is a rising epiphany of carnal sonic force that spangles one into submission by dint of its gleeful and cleaving weight. The guys at 'the quietus' further delineate what's going on here with the following delightful image: "Imagine some hellish pan dimensional Krautrock marching band clad in ill fitting, bong water and Buckfast splattered, suits fronted by David Yow, conducted by a wildly inebriated Conny Plank and waved along by Jus Oborn and Dik Mik and you’re still not quite there. This is music that doesn’t so much ebb and flow as trounce and mangle." utterly compelling. “Third-era Portishead tweaking on brown acid” – Clash 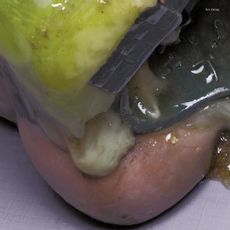