Other-worldly Canon singing from MIEN (YAO) hill tribes in China, Vietnam, and Laos. Raw, ethereal, and cosmic – for fans of Bulgarian choir and Javanese Court Gamelan & Sundanese styles of vocal ascension. Although their name comes from a pejorative Chinese expression that means “dog” or “savage" – stemming from a legend that they were founded by a dog who saved the life of the daughter of a Chinese emperor and thus was rewarded with her hand in marriage – the largest branch of the YAO minority call themselves MIEN, which means simply “people". They number 4 million and are spread over the southern Chinese provinces of Guizhou, Guangxi, Yunnan and also migrated to Vietnam, Laos and Thailand over the last centuries. Part of the Miao-Yao (Hmong Mien) group of the Sino-Tibetan ethnolinguistic family, they have many subgroups, usually defined according to colors of their traditional clothes. Because of their Chinese origins, the Yao consider themselves to be culturally superior to other hill tribes, having incorporated elements of Taoism into their own beliefs as well as adopting the Chinese written system for men. The Yao women produce wonderful embroidered cloth and that’s the main reason why they’re being noticed by outsiders. Recorded and produced in the field by Laurent Jeanneau (Kink Gong), this limited edition LP comes with a two sided insert of photos and liner notes with extended track descriptions by Laurent Jeanneau 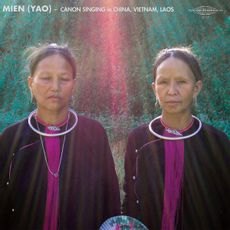