this 2CD remastered deluxe edition is loaded with with B-sides, rare and unreleased tracks.

‘So Tough’ is the second studio album by British band Saint Etienne. First released in 1993, it is their highest-charting album to date, reaching No. 7 on the UK Album Charts. the album takes its title from The Beach Boys’ ‘Carl And The Passions - So Tough’ album. The album was indebted to Sixties classics ‘The Who Sell Out’ by The Who, ‘Smile’ by The Beach Boys and ‘Head’ by The Monkees. The album was originally intended as a concept album which starts at Mario’s Café in London then travels around the world, however it came to be viewed as a solely London album. The album cover features lead singer Sarah Cracknell aged 6 taken by her father Derek Cracknell. 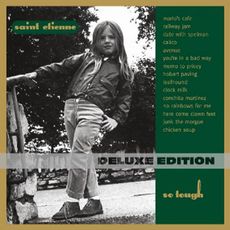