Images taken from backstage at top of the pops recording for telegram sam and solo shot of marc taken in October 1971 at the time of this version recording • alternative recordings of classic T.REX songs. Telegram Sam was recorded in Denmark in 1971 as a pre-recording band run through. What you hear is T.Rex the group playing without the cameras of TV or radio broadcast or to an audience but as a tight knit group getting on with it .. the result is amazing. Baby strange is a recording of an early television broadcast from the same time period. Both songs would appear the following year on the legendary “Slider” album. • Taken from Marc’s own recordings and mastered in 2019 they are not mixed or re mixed or tampered with in any way • All royalties got to the Light of Love Foundation The Marc Bolan School of Music & Film 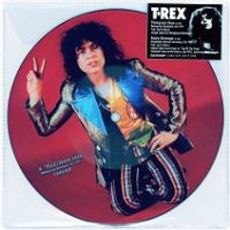