Bernard Grancher's Soleil Gris Eclatant was recorded at the same sessions as the sold out Avenugle Etincelle album (CiS052) from earlier this year.

However, Bernard feels the LP has a much darker side. He explains "It is a kind of logical continuation but in the burying of the ego and all the aspects which make the depreciation of the personality after a wounding episode in the personal life. The material used for the recording is in the image of this dark mood: the synthesizers are at the end of their life and are synchronized with the rhythm machines with difficulty, the tape recorders are faulty and idle, causing suffocating soundscapes. And despite everything, the music starts almost alone, as if moved by the residual force of these old machines which still testify to their loyalty to prove that they still have things to tell..." Soleil Gris Eclatant tells a secret story; that of its artist and the symbiosis which links him to his machines. It is the story of this light which arises from this marriage between the man and the dying machines. A grey light but dazzling and hypnotic, a light that invites you to look it in the face to better penetrate you and live a little inside you. Who will listen to this curious sound testimony? 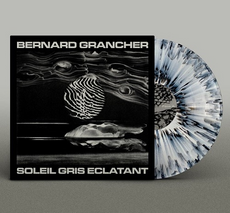