C Slim had amassed quite a catalog of original songs he’s demoed on a tape recorder, deep in the Eastern Finnish countryside. Over the years cassettes and CDRs began to circulate with original copies selling for high prices, before Svart Records drove out to his remote cabin to offer Slim a deal for his debut album. Evangelical visionary, and wayward preacher, H.C Slim calls forth revelations of pastoral love and rustic abandoned buildings. His song is that of the wandering missionary that brings to mind the Holy Joe pastor of John Huston’s Wise Blood, wandering from town to town to find the cracks of light that spill out from heaven, amongst the decline of the backwoods. A man that spent his formative years smoking cigarettes and playing his guitar, between distilling moonshine in an old empty factory, his songs are both apocalyptic and illuminating, swelling between religious fervour and starless prophecies of biblical destruction. Songs like “Wheels Of Judgement”, “Sweet Virgin Mary” and “I Obeyd A Heavenly Vision” throw up Dylanesque lines with the mastery of the old greats, such as Ramblin’ Jack Elliot or Woodie Guthrie. However Slim’s astute and contemporary flair for song-craft wouldn’t be out of place on a bill with artists like Laura Marling, First Aid Kit or The Tallest Man On Earth, if his Finnish maverick and lone wolf pilgrimage lead him out of wilderness. 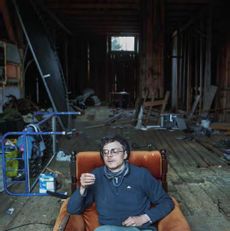