19-years after her debut ‘dry’ polly jean shows no sign of reigning in any of her uncompromising vision & thank god, that’s why we love her. she remains one of the most prominent songwriters of our time, changing styles, refreshing herself, making every release different & interesting & growing in confidence as time goes by. ‘let england shake’ is a stark, dark & scathing analyisis of war & its social & political consequences. it’s arresting stuff, backed by  long-standing allies flood, john parish & mick harvey & recorded in a 19th century church in dorset, on a cliff top overlooking the sea. harvey uses her full vocal range, sometimes recalling the violent nature of war with a child-like quality that has a disturbing tone. samples & horns accentuate the album with parish backing her emotional & powerful vocals, expertly cementing the high quality of output the 2 have put out over the years. it’s undoubtedly some of her darkest material with some of the most folk-orientated backing but it’s  pj so nothing’s that simple. “an album that only the polly of today could have written” 10/10 - nme, “an unexpected but essential punch in the face” 8/10 - clash. 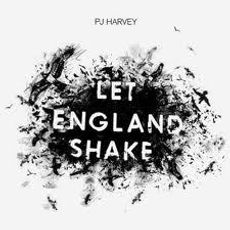