This remarkable CD captures The Pixies at their finest, playing a show - broadcast by public radio network KCRW FM - at the Hollywood Palladium in Los Angeles.

From the outset, this legendary New England 4-piece are at the very top of their game - opening with the savage rip-snorting blast of 'Rock Music'. Even when pausing for breath, the slower numbers like 'Gouge Away' & 'Subbacultcha' are tough-as-nails & seethe with a barely contained fury. This December 1991 set is naturally heavily weighted towards the band’s then current record, ‘Trompe Le Monde' - All but 2 of its 15 songs are represented here. 'Head On', originally by the Jesus and Mary Chain, is a rare cover version amongst the Black Francis compositions. The only other non-original here is 'Cecilia Ann', a number cut in the early 1960’s by The Surftones. vinyl artwork: 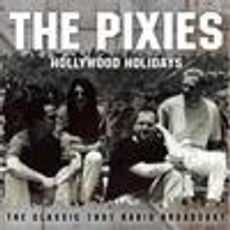