wakin on a pretty daze


These aren’t jams - these are songs that glide as they unwind, with a natural charm, unfurling at their own extended & unhurried pace - but not a second of this loveliness is wasted or surplus.

these songs zero in on a hazy perfection with laser-guided precision & could keep on ringing out, exploring every possible wrinkle in their chord sequences for as long as Kurt could stand to play them. Along with his passion for the 4-track-toting titans of early 90’s indie-rock, Vile also harbours a love for classic rock of substance – Creedence, Petty, Young - but Within the footprints he follows, he carves a distinct path of his own, making an art of dipping from introspective mellow rambles, to sky-scraping anthems; eager to rock out, equally unafraid to sing low & sweet. on his 5th solo album, kurt's crafted an album that would have sounded great 30 years ago, sounds great today & will still sound great 30 years from now. The new ‘Deluxe Daze (Post Haze)’ edition includes ‘Wakin On A Pretty Daze’ repackaged with the new ‘it’s a big world out there (and i am scared)’ EP. 9/10 - album of the month, uncut.

deluxe 'daze (post haze)' 2cd edition
***features six (seven, but one is a reprise) previously unreleased songs, Recorded during the same sessions as the album. ‘it’s a big world out there (and i am scared)’ sheds further light to the ‘Wakin On A Pretty Daze’ recording process with new songs, mixes & alternate versions of select album tracks. The original ‘Air Bud’ & ‘Snowflakes Are Dancing’ tunes are reprised as ‘Wedding Budz’ & ‘Snowflakes Extended’ respectively, whilst the brand new number ‘Feel My Pain’ channels (previous collaborator) Michael Chapman’s finger-picking, distilled through the signature sound and style of Kurt Vile, Philadelphia’s constant hitmaker.***

daniel recommends : "he has nailed his folkish, slackerish indie now, 8 minute + songs that seem nowhere near that long, turning aimlessness into a virtue." 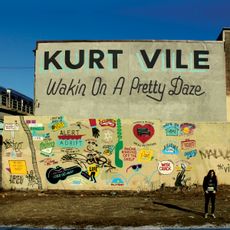