a meticulously remastered reissue of the band's 1995 sophomore album - their biggest selling record & one that undoubtedly helped to define a whole generation.

Each edition of this album includes a remastered version of the original. The 3CD deluxe format includes 2CDs’ worth of bonus material including of all the B-sides plus rare & unreleased Oasis tracks from the ‘Morning Glory’ era. "filled with big, gorgeous ballads. Unlike 'Definitely Maybe', the production on 'Morning Glory' is varied enough to handle the range in emotions; instead of drowning everything with amplifiers turned up to 12, there are strings, keyboards & harmonicas....they have a majestic grandeur in their sound that makes ballads like 'Wonderwall' or rockers like 'Some Might Say' positively transcendent" 5/5 - all music guide

· The deluxe box set includes:
· 3CD - ‘(What’s The Story) Morning Glory?’ deluxe CD, meticulously remastered with B sides, plus unreleased  and rare tracks including demos and live recordings.
· 180 gram double LP in gatefold sleeve - Heavyweight vinyl of ‘(What’s The Story) Morning Glory?’, meticulously remastered from the original 1995 half inch tapes. Includes download code for B sides, plus unreleased and rare tracks including demos and live recordings.
· 12” single - This 12” is a replica of the original promotional 12” sent to industry contacts as a promotional item in 1995. Tracklisting features A side ‘Cum On Feel The Noize’ and B side ‘Champagne Supernova (Lynch Mob Beats Remix)’, which has never been commercially available.
· 7” single - This 7” includes demos of ‘Hello’ and ‘She’s Electric’, both of which were recorded in ‘Definitely Maybe’ producer Mark Coyle's studio. The ‘Hello (Demo)’ track is exclusive to the box set.
· Cassette - Exact replica of the original promotional copy of ‘(What’s The Story) Morning Glory?’. This rare cassette, only sent out to industry contacts, has never been commercially available. It includes ‘Step Out’ which was removed from the album prior to its release
· Collector’s coffee table book - This beautiful 56 page hardback book contains rare and unseen photographs documenting the ‘(What's The Story) Morning Glory?’ period by Stefan Batselier, Brian Cannon, Kevin Cummings, Grant Fleming, Jill Furmanovsky, Owen Morris and Tom Sheehan, plus private photos taken by the inner circle. Original artwork designer Brian Cannon explains the story behind each single’s cover art and sleevenotes are written by Neil McCormick.
· ‘Roll With It’ cigarette papers - These rolling papers were an original 1996 promotional item. They have been replicated solely for the box set and feature the lyrics for ‘Roll With It’ printed on the back.
· Postcards & art card set - 3 photograph postcards and a 12 x 12 inch art card. 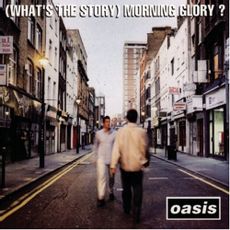