No Cities To Love


going straight for the jugular, the female post-punk trio release their 1st new album 10 years to a flurry of excitement & critical acclaim - a record of reinvention & re-ignition of an unparalleled chemistry to create new sounds & tell new stories.

Brownstein, vocalist / guitarist Corin Tucker & drummer Janet Weiss - who came crashing out of the 90s Pacific Northwest riot grrrl scene, setting a new bar for punk’s political insight & emotional impact - released seven searing albums in 10 years before going on indefinite hiatus in 2006. now they prove that they still rock hard with a record that grapples with love, power & redemption without restraint. never listened to sleater kinney but love honeyblood? give this a listen - you're gonna love it! "a work of force & elegance, it shares the ferocious, watchful intelligence & formidable control of their best records" 5/5 - mojo, "their balance of the tense & clanging with the urgently poppy is impeccable" 8/10 - uncut.

tom recommends: after years of being away they're back and brilliant and heavy as hell - i love it and if you ever come into the store while it's on i'll be the one headbanging to it.

christian recommends: now here’s how to do a comeback – bracing and propulsive and rammed with great hooks, the riot grrl trio’s attitude undimmed despite ten long years away. 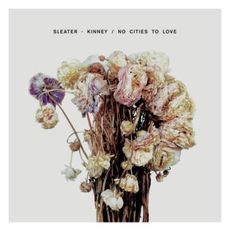