live at the music hall


there is barely anything more musically thrilling & captivating than a phosphorescent live show so you know this is going to be a seriously good listen.

Inspired by live albums such as Bob Dylan’s 'Hard Rain', Houck envisioned an album that, rather than play like a greatest hits collection, would present songs from throughout his catalogue in new ways, representative of how the songs have grown & transformed over the years in the live setting. the ability of matthew Houck’s songs to morph & expand is showcased here through these revelatory performances. 'Live At the Music Hall' spans nearly 10 years & 4 Phosphorescent albums. The Phosphorescent live line-up here features Ricky Ray Jackson on guitar & pedal steel, pianist Scott Stapleton, drummer Christopher Marine, bassist Rustine Bragaw, percussionist David Torch & organ / keyboards player Jo Schornikow. an inspiring document of a band at the peak of their powers. 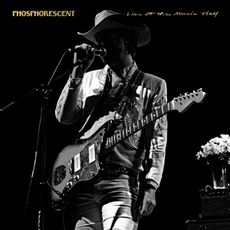