The Decline Of British Sea Power

'The Decline of British Sea Power' now comes on multiple formats including a deluxe collectable 2CD + DVD casebound book, featuring a re-mastered version of the original studio album along with b-sides from the band. This version includes a DVD featuring live footage from Warwick University and Tokyo along with the bands’ music videos from the era.

*** 'The Complete Illustrated British Sea Power' - this extensive box-set features four CDs (the original 'Decline' album; B-sides; a CD of rare/live/alternative material; a CD of demo recordings). The DVD of rare & unseen BSP footage will also be included in this highly limited indies only version. There will also be a glossy, visual-led large-format book featuring compelling & unseen photos, plus visuals & artefacts from the 'Decline' period. These images are accompanied by extensive all-new text from British Sea Power and Roy Wilkinson. The book also features testimony and anecdotes from the BSP audience *** 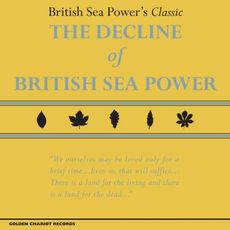