at long last, the vinyl version on jack white's third man label, no less - Already Platinum, 'Magna Carta Holy Grail' is JAY Z's twelfth studio album, and a portrait of an emcee embracing fatherhood, marriage, and striking a balance between a past spent coming up and a future shuffling around the top.

*This LP version also includes a limited edition flexi-disc postcard of exclusive non-album track ''Open Letter'', hidden under the artwork on the back cover. 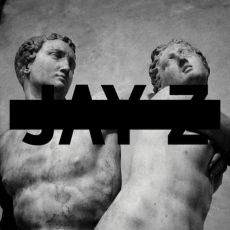