songs of warmth and hope from the former beta band front man as he swings musically across dance, pop, folk, dub & deep house influences on his third solo effort - remaining as lyrically adept and open as anything he's done before (going back to the 'Three EPs').

this is the sound of a songwriter in full stride, and not just in artistic terms. As a follow up to his "double political concept album" 'Monkey Minds In The Devil's Time' this is an album that is, in true Steve Mason fashion, a reaction against that concept and a move towards a more simple ethic; an album where each song is a separate entity - and each one more joyful than the last. however, this is by no means a 'singles compilation'; instead, core themes crop up throughout - from the possibility of others to redeem the self, the opportunity of change for the better in the individual, the joy of life and the world we inhabit, a joy discovered by Steve, we like to think, with his move to the creative buzz of Brighton. "he's a briliant songwriter... tender sun-dappled folk runs throughout, laced with old-raver ingredients." - 4/5 mojo 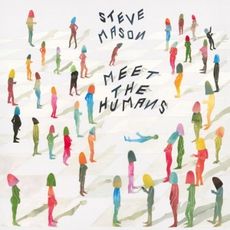