reissue of death in vegas' third album which, like its predecessor ’The Contino Sessions’, was another massive critical success on its release in September 2002, and it duly went Top 20 in the UK – a mind-blowing achievement for such an experimental, disparate and often macabre listening experience.

Guest vocalists include Paul Weller, Dot Allison, Susan Dillane, Hope Sandoval, and most headline-grabbingly at the time, Liam Gallagher took time out from production on Oasis’s 'Heathen Chemistry' album to voice the title track. This special 2CD set brings together on a bonus disc all the mixes of the singles as well as a BBC Evening Session from the album’s aftermath which gives a window onto how the Death In Vegas roadshow unfolded as a fully integrated live band. 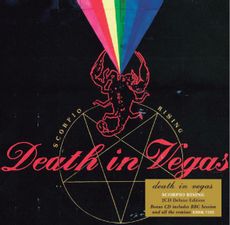