This is the first time the recordings are being offered on LP since their original release. Recorded in the Polydor Studios in Hamburg in January 1974, the set was recognised as a breakthrough in Reich’s career. It comprised his longest work to date, 'Drumming' of 1970-71, lasting nearly an hour and a half & two newer works of 1973, 'Six Pianos and Music for Mallet Instruments, Voices and Organ'. 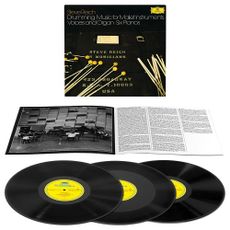