'remain in light' had more words than any previous heads record, but they counted for less than ever in the sweep of the music. the album's single, 'once in a lifetime', flopped upon release, but over the years it has become a classic, quirky pop song & an audience favourite. A daring & experimental fusion of new wave rock, electronica, disco & african music that, for many, would define talking heads' classic sound. 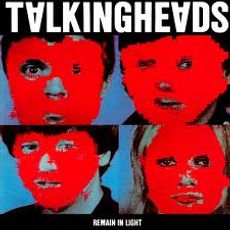