While we're all still recovering from last September's epic (and now sold out) 'New Cruiser' album, Newcastle finest psychedelic space explorers BLOWN OUT have been busy crafting away their follow up effort 'Superior Venus'.

The album is expected to land March 24th on neon orange vinyl (200 copies for UK/Europe) and once again consists of two long head expanding psych outs. You know by now what BLOWN OUT are all about ... and once again it's completely fuckin’ epic. Protector Of Kings, Ejected Comet, The Reversing Earth, The Opaque Dream, Superior Venus. '.. the Sun rose contrary to his wont; twice he rose where he now sets, and twice he set where he now rises ..' Telepathic Rhythms collide with High Mindstream Waste Guitar. Heavy, melodic, destroying. The whole universe in your brain’ Power Trio Powerdrive Psychedelic Rock. Features members of BONG, Pigs Pigs Pigs Pigs Pigs Pigs Pigs, Khunnt, Haikai No Ku, Drunk In Hell etc etc 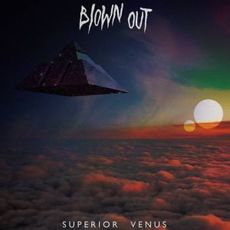