To coincide with the release of their new album Risk To Exist (21st April), Maximo Park are release an exclusive splatter vinyl version of their album exclusive to RSD.

'Risk To Exist’ sees Maximo Park on blistering form, bringing together their trademark hook-laden melodies and sense of urgency with off-kilter rock, soulful grooves and pop sensibilities. Informed by the dire state of world affairs in 2016 and crumbling political systems, their latest body of work is a vital record for our times. ‘Risk To Exist’ was co-produced by Tom Schick (Wilco, Beck, White Denim) and Maximo Park. Keen for the inspiration of unfamiliar surroundings after writing the album in their native North-East, the band decamped to Wilco’s studio, The Loft in Chicago, in Autumn 2016. Recorded completely live, the recording represents another bold stylistic step for the band after 2014’s Top 10 ‘Too Much Information’. Maximo Park have also enlisted Mimi Parker from acclaimed US band Low for the record, whose voice lends its inimitable warmth to five album tracks, including lead single ‘Risk To Exist’. 1. What Did We Do To You To Deserve This? 2. Get High (No, I Don't) 3. What Equals Love? 4. Risk to Exist 5. I'll Be Around 6. Work And Then Wait 7. The Hero 8. The Reason I Am Here 9. Make What You Can 10. Respond To The Feeling 11. Alchemy 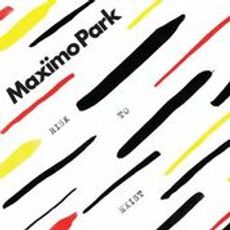