On this special vinyl release for Record Store Day, Marconi Union have commissioned four stunningly evocative and bold remixes from Biosphere, Japan's Steve Jansen, Antonymes and Digitonal, one for each track on Ghost Stations, which exquisitely compliment the captivating beauty of the original album.

With Ghost Stations, their ninth studio album released in August last year, Marconi Union were not afraid to accept the challenge of making new music rather than just repeating their earlier work and were well aware of the risk of trying new things. "Marconi Union have been supplying the world with superior ambient music for some 14 years now" - The Sunday Times "One of the finest electronica releases of the year" - Louder Than War "Marconi Union always find beauty in the bleakest places" - Uncut 8/10 Tracks: Sleeper : Biosphere Remix / Remnants / Shadow Scheme : Antonymes Remix / Abandoned / In Silence : Steve Jansen Remix / Riser : Digitonal Remix 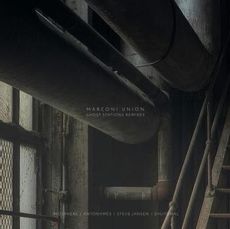