Exuberant, infectious, abrasive & primal – open your mind to their explorative, free way of life and feel yourself unshackled from yours.

The record 2017 needed. An indispensable, guttural dance phenomenon - this album has barely left the shop stereo since its release. It’s become our afternoon energy boost, brandishing some of the most essential rhythms we’ve heard in eons. Jagged post-punk guitars rub up against dirty rolling arpeggiated synths, krautrock rhythms and feral psychedelia to awaken a brave new world of dance music. Fabled for their pagan-influenced and forest-based stage costumes, the band have reportedly evolved from squat parties and warehouse raves and now they’ve summoned the exhilarating soundtrack to the parties in our dystopian future.

The now-East Londoners ignite wild white noise fires from the outset, conjuring the kind of dance/rock/electro frenzy usually reserved for LCD Soundsystem (‘The Invisible Real That Hurts’), the kaleidoscopic polyrhythmic beats of Animal Collective (‘Tuesday Makes Me Cry’), the adventurous art rock of Django Django (‘Hanging With The Moon’), the experimental krautrock of CAN (‘I Want My Minutes Back’) or the industrial synth-psych of Suicide (‘Johnny Guitar Calling Gosta Berlin’). There’s also a nod to Terry Riley’s avant-garde masterpiece ‘In-C’ and in fact to the free-wheeling improvisation of West Coast late 1960’s minimalism in general, across the whole album... only these guys don’t really do minimal – they do maximal!

Yet despite all these discernable influences, they sound like nothing else on this earth, inhabiting a world entirely of their own.. Thankfully there’s an open invitation for all to join their new world chaos.

“Eclectic and raw, giving the air of a pagan CAN or a forested Fall...devilishly playful, suitably daft & absolutely belting" - the quietus. 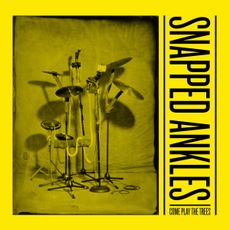