Taking Drugs To Make Music To Take Drugs To (2018 reissue)


the re-release of the one with the preposterous title now comes digitally re-mastered - featuring Sonic Boom aka Peter Kember (Spectrum / E.

A.R.) and Jason Pierce (Spiritualized). Never has a record been so aptly titled, or so perfectly descriptive of a band's particular vision of the universe. For all that, the original appearance of this album was in fact a bootleg on a forgotten imprint in 1990, later supplemented with contemporary outtakes and cuts for the ‘Bomp’ reissue in 1994 and one further song for the ‘Space Age’ version in 2000. The original seven tracks, dated January 1986 and the first recordings to feature Pete Bain on bass, are collectively known as the Northampton Demos -Both Sonic and Pierce on record as long preferring these takes to the eventual versions that surfaced for the most part on ‘Sound of Confusion’. 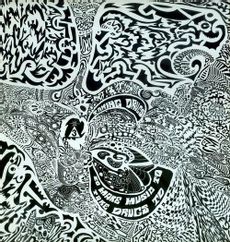