Who knew that some of the most exciting Afro-funk records of all time were actually made in the small West African country of Benin? contained here is Utterly trancendant dance music with an unstoppable groove.

intrepid crate-digger and Analog Africa founder Samy Ben Redjeb has unveiled a treasure-trove of Vodoun-inspired Afrobeat heavy funk crossover greatness, featuring 14 tracks from 1963 - 1980. Right from the laceratingly raw guitar fanfare which kicks off Les Sympathics’ pile-driving opener, the previously unreleased “A Min We Vo Nou We”, it’s clear that ‘African Scream Contest 2’ is going to be every bit as joyous a voyage of discovery as its predecessor. 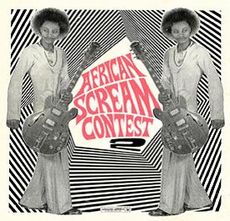