Frick is a Berlin-born music composer primarily known as one part of the group Brandt Brauer Frick.

Stunningly despite a 20+ year history of making music 'Second Yard Botanicals' is his debut album. With BBF keeping Frick inspired and busy since 2009, other ideas had piled up until a temporary break allowed him to fully dive into them - "While it took so long until I made my first album, it took about two months once I started." Exploring a vast number of instruments, field recording and deconstructed breakbeats woven with undulating filters and gossamer melodies, the album sees Frick drawing on the world around him in a free associative style ; "A word I sometimes had in mind was „Alltagspoesie“, the poetry of everyday life," he explains. "The thought that however small and unimportant things and people are, they - or we - all hint towards each other, if not to say towards the whole. The fact that half of the pieces on the record are short miniatures has to do with that. Throwing something in and hearing what it tells.“ 'Second Yard Botanicals‘ at its core is based on sonic collage, from a genre point of view it's highly eclectic, remotely echoing Frick's classical composition background as well as his hip hop / trip hop past - "which is how I first learned using sequencers about twenty years ago". While Frick is coy about direct influences on his music, non musical inspiration played a key role - such as the novel 'Anniversaries‘ by Uwe Johnson, which is divided into the 365 days of a year and weaves a large nonlinear picture; „It’s among the things that showed me on how many levels a piece of fiction can be able to resonate without falling apart completely." Besides the actual recording of instruments like piano, guitar and percussion, Frick sampled heavily from his twenty year deep sonic archive of performances and field recordings. "Mostly they were from unused sessions, forgotten projects that I rediscovered or live recordings of my chamber music pieces, using them as samples to make something new," he explains. „Also chance recordings on the phone like the boomy snares in ‚Church 5 Loop 2‘ which Daniel (Brandt) played during soundcheck for a BBF gig in a huge church, or rain drops in the gutter of our studio backyard, and more things like that." Recorded in the band's shared studio space in Neukölln and mixed by bandmate Jan Brauer the whole project was kept in house. "We are surrounded by a bunch of other musicians and artists in the second backyard, who share their ideas, parts of their lives and often their equipment." 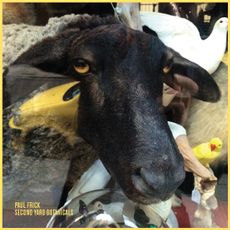