Robert Johnson, “The King of The Delta Blues Singers”, achieved his reputation based on 29 timeless recordings cut for the ARC/ Vocalion group of labels at five sessions held between November 23, 1936 and June 20, 1937. The impact of Johnson's combined intense vocals, outstanding guitar skills and songwriting talent introduced a musical and lyrical vocabulary that formed the foundation of modern blues and blues rock that influenced generations of musicians including Muddy Waters, Elmore James, Eric Clapton and The Rolling Stones. Eric Clapton is quoted as saying that “Robert Johnson to me is the most important blues musician who ever lived”. For Record Store Day 2019 Traffic Entertainment is proud to present Johnson’s “Kind Hearted Woman Blues” along with “Terraplane Blues” on micro-groove 78 RPM vinyl housed in a spectacular recreation of the Vocalion label sleeve used for the original issue. Tracks : A Side - Kind Hearted Woman B Side - Terraplane Blues 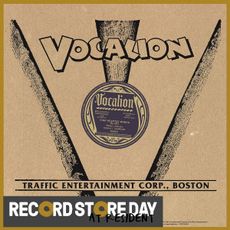