sending his more-gravelly-than-ever tones colliding with the gloomiest electro-pop & post-punk that the 80s had to offer, the result is a joyfully gothic platter of brooding, swaggering pop songs.

From the opening bars of Disbelief Suspension onwards, it’s clear that ‘Somebody’s Knocking’ is an album made by someone deeply obsessed with how music - with all its primal, spiritual healing power - truly penetrates the soul. From the ‘Raw Power’-esque garage metal grind of that opener to Letter Never Sent’s rocket-powered take on Love-era kaleidoscope-psych, through the pensive subterranean murk of Dark Disco Jag & on to Playing Nero’s sun-bleached riff on Joy Division’s Atmosphere, there’s the glee of infatuation running deep in the tracks. “voice weathered like medieval parchment, lanegan brings dependable authenticity to these savvy pop songs’ dire admonitions, but also an abundance of swagger & fun” 4/5 – mojo. 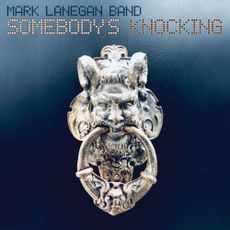